There are countless ways to write about and honor Martin Luther King Jr. The man was an exceptional leader for peace, stood up against hate, and fought for equality and acceptance. He was hero, a leader, and a role model for people of all ages, race, religion, and gender. His words are words to live by.


I spent some time this morning before work looking through MLK Jr quotes. I wanted to choose one that resonated with me to write about today for my 500 words. I chose two. 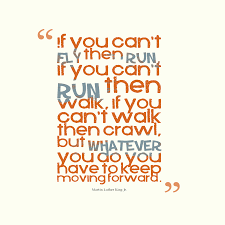 We live in a society where we want everything instantly. Instant success, instant gratification. We want to get to our next destination as quickly as possible. But we can't always have what we want at the snap of our fingers. It's not always that easy to just sprint through life without any obstacles. Sometimes we have to slow it down a notch, tap the brakes. And sometimes we need to slow it down even more, to a tiptoe pace, moving moment to moment.


As long as we continue to move forward, we are on the right track. Sometimes we will want to scoot backwards, or sometimes we want to put everything to a halt, a complete stop. But we cannot do that. We keep moving, no matter how slowly we have to move.


As a nation, we need to move together. We need to work together, at each moment, at bringing peace into the world. As individuals, it's difficult to make big changes. But together, we can. If enough of us work toward peace and love and kindness, we can begin to see a more beautiful world.

Like Martin Luther King, Jr, we need to realize the importance in standing up for something we believe in. But some of us must learn HOW to stand up for what we believe in. Over the weekend, there was major twitter drama between a member of One Direction and a famous "youtuber". You can roll your eyes all you want at this story, but it is a prime example of how easily hate and misjudgment are thrown out into the world. The band member tweeted kudos/appreciation for one of the Duck Dynasty dudes, and it caused Tyler, the youtuber, to say something about how disappointed he was, considering Tyler is homosexual and a huge, well known, One Direction fan. Then it got crazy. 1D fans were tweeting death threats to Tyler. The band member, Liam, even tweeted Tyler and told him he was "never really a fan", which caused even more hysteria, and suddenly things like #riptyleroakley and suicide assumptions were tweeted. It was disturbing, and disgusting, to see 13 and 14 year old kids tweeting such hateful, cruel things to someone they don't know.


So what in the hell does that have to do with Martin Luther King Jr? If you ask me, everything. These kinds of twitter battles happen all the time. Silly as it may seem, it's real, and it's dangerous. People are being targeted and bullied to the point where they are told to kill themselves, or threatened to be killed, or hurt. The kids tweeting these things may not actually mean what they are typing, but they may very well mean it. And their intent behind their words don't really matter. They are still saying them. And it's not acceptable. We need this to stop.


Martin Luther King, Jr spoke about love, and often said that hate does not stop hate. This twitter war, and countless others, is a perfect example of people trying to solve hate with hate. They are upset, so they spit out hateful things. When we will realize that does not solve our problems, that does not make things better? We will be better when we can respond to all things with love.


My challenge for all of you today, and maybe every day, is "what difference can I make in the world today?". Small things, of course. I don't think anyone expects any of us to go out and start a new nonprofit or to donate thousands of dollars to charity on any given day. But we can do small things. Maybe it's holding back when we want to make a mean comment. Maybe it's telling our friends/peers/whoever that what they did was wrong. Maybe it's writing a note to a coworker who is having a rough day. Maybe it's making dinner for your family. Do something.


I apologize that this post is kind of all over the place. I really wanted to include the One Direction/Tyler issue, because I saw it all over Twitter and it was almost heartbreaking, in a way, to see kids be so cruel. And I sit and think about people like Martin Luther King Jr, Jesus, Mother Theresa, Laurence, and I wonder what they would do in these situations. Perhaps if we all had that mindset, there wouldn't be twitter death threats or hate crimes.


I hope you all have a blessed week.