I had a couple of ideas for Valentine's Day posts, so I went to facebook to ask what topic people wanted to read about. A lot of people wanted all three. Sure, I can do that. So here is topic number one: How my parents met, and how my siblings each met their spouse.

Mom and Dad
I absolutely love the story of how my parents met. Their parents were acquaintances and both families were on vacation in Ft. Walton Beach, FL. My mom was there staying in a condo with some of her friends, and my dad was there with his parents and some buddies. My dad's parents encouraged him to go introduce himself. My dad says his first thought was "Oh great. A bunch of teachers!". After a few drinks, though, he stumbled over and knocked on their door...and my mom was the one to answer. He told them that he and some of his buddies were going to a bar later if they wanted to join. My mom, staring at this tipsy stranger, was not interested. But somehow, she and her friends wound up at that bar. My dad says he told her the name of the bar and that she purposely went there, my mom says he never told her the name of the bar but there were only so many options and that she and her friends were going out anyways. Who do you believe? Personally, I'm on my dad's side here.

I recently learned that my mom DROVE MY DAD HOME from Florida that year. She had a friend with her, too, but still. Could you imagine if I was in that position? My parents would FREAK if I drove a stranger home with me for FOURTEEN HOURS!

I believe the rest of the story is that a few days after they were back from Florida, my mom went over to my dad's house for lunch. They dated for some time, and eventually he proposed by hiding the ring in a puzzle box.

For as long as I can remember, my family has been going to Ft. Walton Beach. It's pretty cool to know that my parents met there. They have a wonderful relationship. My dad is gentle, sweet, and funny. My mom is generous, passionate, and adorable. I love the two of them with everything I have inside of me! 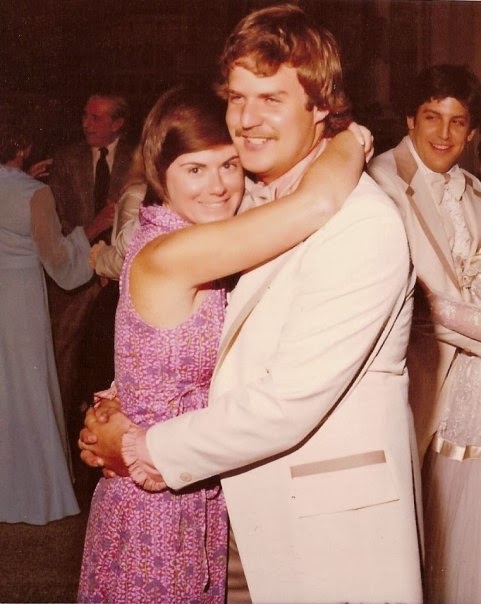 Maureen and Dave
Mo and Dave are high school sweethearts. They met in the fall of their senior year at a UofD football game through mutual friends. Earlier that day, Dave had told his dad "I am going to find my date to homecoming tonight". When he got home, he reported "I found her!".

They continued to date the rest of their senior year. They went to different colleges though, and had an "off and on" relationship for their four years in school. They dated other people, but always wound up back together. My friends would constantly ask me "is your sister still dating that guy?". And I'd say yes, even if they weren't, because we all knew Mo and Dave were meant to be together.

They were together about 8 years before Dave proposed. And guess where that took place? Ft. Walton Beach. It was just my parents, Mo and Dave that year since Jonathon and I were both in college and couldn't get down there. Dave proposed while walking on the beach after eating diner one night. My dad knew about the whole thing, but my mom did not. I got the call while I was in the computer lab, furiously typing an essay for school. My sister said something like "we're going out to celebrate...because I'm engaged!!!" Since I was in the computer lab I couldn't shriek, but I did gasp and begin to cry because I was so happy for her.

They married in the summer of 2008, just before my senior year of college..and now they have Ryan!

They met in college. The two of them had mutual friends, and Sara was at Jonathon's house for a party. One of Sara's friends was telling Sara that she wished she had more confidence in guys and Sara was giving her advice. Sara said "Just find what kind of music he likes, and start talking about it." To give an example, Sara decided to try it on Jonathon- even though she really wasn't that interested. She went to his stack of cd's, pulled one out and said "Oh my gosh I love this band!" Jonathon was so impressed that she knew who the band was that they struck up a conversation- except Sara really had no idea who they were, she just played along. That theatre major came in handy!

Even though Sara wasn't interested before, she must have seen something in him because he asked her out on a date and she agreed. They dated through the rest of their college days, and lived together for a while before getting engaged.

Jonathon asked us all to be there to celebrate the engagement. No, it wasn't in Ft. Walton. It was in Indianapolis, where they live. He told Sara that he had an event for his work, Big Brothers Big Sisters, at the college. Since she usually went with him to his events, she didn't think much of it. Until they got to campus and it was empty. She started harassing Jonathon, telling him he must have gotten the date wrong. He reached into his pocket for his phone, to "call his manager", but really reached in and pulled out the ring.

The rest of us-my family, Sara's family, and a few of their close friends, were waiting at a nearby restaurant. Sara obviously had no idea we were all there. It was so fun to see the look on her face- and my brother's. They were so happy..and still are!

Don't worry, they snuck Ft. Walton in there- they went there for their honeymoon :)


I learned once in a psychology class that your relationships are often influenced by the relationships of those around you. A project I did for that class was to create a family tree, and to describe each relationship in your family. I had nothing but positive things to say. My parents and siblings/siblings in law have all been very influential to me, in a positive way. I truly admire the love that each of them share. It's a beautiful thing :)