This blog is long overdue for an inspiration post!

Meet Desi. Desi is...well...alright I'll just say this. I know Desi because of American Idol. We really don't need to go into that whole story again but basically, Desi and I met, didn't really get along, went through the same experience with a guy, reunited over our angst, and became friends. She's one of my "idol friends" that I actually met in person before becoming pals via Internet, so yes I am sure she's not a psycho killer ( none of my idol friends are). We once spent an entire afternoon in Cleveland watching True Life. We have very similar emotions, life changes and overall personalities.

Desi used to live in Michigan, too, so we would see each other at shows a lot. She lives in Virginia now, so I haven't seen her in over a year but we still talk via twitter and Facebook.
So friends, meet Desi! Here is her set of before and after pictures. 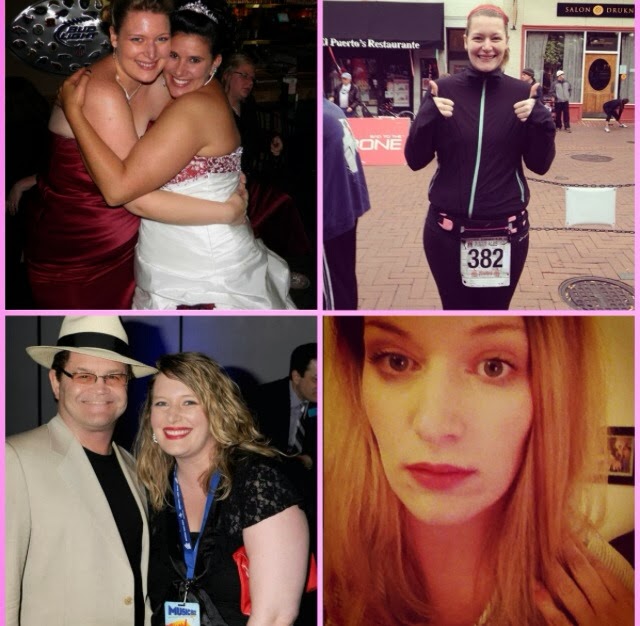 Can you tell us a little about yourself? I'm 27 and now I'm a runner but for most of my life, I hated working out. Through high school and college, most of my exercise consisted only of marching band rehearsal. I wouldn't say I was ever totally unhappy with how I looked after I graduated from college. I've always been bigger and I thought it was just genetics. Other than running and working out, I love music, travelling, and Michigan beer.

What moment or event started your weight loss journey. I went through a really horrible break up two weeks after moving thirteen hours from home, and the only thing that would make my mind stop was being in the gym, because instead of thinking about him, I'd think about how much I hated whatever I was doing. I'd swim for a few hours and then put myself on ellipticals or treadmills (and watch Dog the Bounty Hunter) for hours a day.

What was your starting weight?What weight are you at now? If you don't want to giv your weight, just tell us how much you've lost Started. around 230, currently hovering between 190-195. I've started gaining back when I started focusing on more weight training. I don't pay very much attention to my actual weight, though (mostly for that reason)

What would you say is the most important factor in your weight loss? Changed eating habits? Exercise? Changed thinking? Something else?Exercise because I don't really eat any differently then I ever had before. I know I'd drop weight faster if I focused in it more, but my work/life schedule is so crazy that if I eat two full meals in one sitting per day, no matter how "bad" they are, I consider it a success.
Are there any obstacles you had to overcome to begin exercising / keep exercising? I work in college basketball, and during the season (November-March) it's definitely a challenge to balance work, sleep, and running. My arena also hosts concerts throughout the whole year, and sometimes when we have two games and three shows in a seven-day period, the gym is the last thing on my mind. It's give and take. I know I will get sick if I don't rest enough, but I also know that it's easy for me to get out of the habit of working out if I'm not doing it every day. This is the same reason that rest days are hard for me to incorporate. I've also had a couple injuries along the way, and coming back from them have been slow and sure.

What’s your favorite exercise? Other than running, I love Les Mills BodySTEP and BodyPUMP classes. I'm also a fan of Pure Barre and kettlebells.
How do you deal with boredom in your exercise program? Mix it up. Try new classes, new exercises, or read new blogs. The Les Mills series has totally changed how I felt and thought about lifting weights, something I thought I'd never like, but I like my BodyPUMP classes even more than running now.
What are 3 of your best eating or dieting tips you would like to share? Change your mindset. If you continually tell yourself working out isn't fun, of course it won't be. If you tell yourself you don't have time to make healthy foods, you won't. / Premake meals. When I can, I try to do a meal prep day to divide up lunches for the week and try to throw something healthy in the crock pot for dinners. / Not really food focused, but still important: reward yourself. I tried to hold off on buying new clothes for as long as I could (until I was at my mysterious goal weight I guess?) but it's not worth it. Dress your new body along the way, whether it's a splurge on cute workout gear or new work pants.
Any final words of advice? If you're low on inspiration or not sure where to start, start googling. There are so many great health-focused blogs out there that there's no reason someone can't start training in their own home for almost no money out front. It's also really helpful when you're in a plateau or not feeling the forward movement - everyone goes through that. And always remember you can do more than you think you can! I never thought I'd finish one half marathon, let alone two with three more currently on the schedule and be planning for a full marathon next fall.

Thank you so much for featuring me! I was honored that you asked. I love the story of how we met :)

How cool! She's definitely an inspiration. As are you! Keep up the good work :)

P.S. I just noticed that I'm on the side bar. How cool! Thanks!!