I the fall of 2007; one of my best friends, Jess, introduced me to Taylor Swift's music. Her debut album had been released a year prior and she was  gaining attention for her songs "Tim McGraw" and "Teardrops on My Guitar". On first listen to one of her songs I immediatley went out and bought her album. I had never been a country fan, but that wasn't what drew (ha, swiftie pun) me to Taylor. It was her songwriting. The fact that she was a teenager and writing every single one of her songs really inspiried me. And they were GOOD. I admired how she just poured her heart out into those songs and had no intention of holding back.

Ever since the day I bought Taylor's first album I have been writing. I bought a leather journal and would sit in my college apartment, writing on scrap paper and then copying it into the journal. The very first "song" in there was from November 2007. A few months later, Taylor was playing a show at our college. Jess and I went, along with our friends Sam and Lauren. By some force of divine intervention, met Taylor. I brought my journal with me to that show and asked her to sign it. I will never forget the look on her face. She grabbed it and said "that is SO AWESOME". And then she said "Please fill that book up! Keep writing!"

Her signature on my book 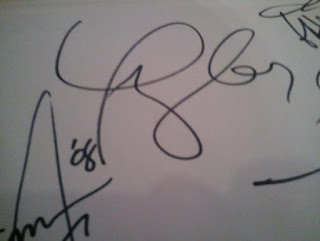 It is now August 2012, and I just filled out the last page in that journal. I cannot tell you the absolute overwhelming emotion that I felt when I closed the book. Every single emotion that I have felt over the past six (almost!) years is held in that book.

I read through each and every single page last night and I wanted to share some of my thoughts.

52 are about a personal relationship. Mostly boys, but some friends as well. There are seven boys that have more than three songs about them. There is one boy with 14 songs about him. He wins. Second place goes to the boy with 6 songs about him.
20 are personal stories about my transitions, memories,emotions/struggle with depression or anxiety. Most of these were written during times of change. Graduating, leaving mvc, trying to find a job.
15 are written based off a friends life/relationship/something I read in a book or heard in a song. Most of these are my favorites, actually.
10 are inspirational; meant to help others.
9 are written about a friend or someone who has inspired me. Most are titled after that person. The very first one I ever wrote falls under this category, and it is about Melinda Doolittle.
3 are about God.

There are many that have been shared over the years, some that have never been shared. I just want to post the last one I wrote, tonight. This one was really fun to write as I wanted to include everything. I also wanted to incorporate my favorite children's story, Peter Pan. So that's what I did. I hope you like it.


As far as the Taylor connection goes, I continue to listen to her music daily, and she continues to inspire me. I often wonder how many people have asked her to sign their journals, if I was the first. I also despretly want to meet her again and show her that I finished it.

People sometimes ask me what I'll do with these songs. I don't know. I can't write or play music and I certainly cannot sing. But someone once told me "babygirl, someone's got to sing those songs". That someone is now the same person I refer to as Voldemort, but that statement was the only honest thing he ever said to me. Maybe I will send them somewhere. Maybe I will stalk Taylor or Kelly Clarkson until they read them and find one that they can record. I'm really not sure. For now, I am just going to read them over and over again and remember these past six years and all the growing up I have done.

To all the boys and friends who caused me pain, look at me now.

To all the beautiful people who inspired the happy songs, thank you for saving my soul.

To every single person who has read something I wrote; I love you, and thank you for supporting me.

To my writing inspirations: Taylor Swift; Kelly Clarkson; The Spill Canvas; Melinda Doolittle; Mandisa; NeverShoutNever; Ed Sheeran; Lady Antebellum; Crystal Bowersox; Gavin DeGraw; Jason Mraz; and Sara Barielles: Thousands and thousands of hugs to all of you for making music that gave me strength and power to keep going.

What a bittersweet moment - and milestone - it must have been, writing that last song. I know how I feel upon finishing a novel, so I can only imagine what it's like to close the cover on this baby of yours that's been six years in the making. What a beautiful story it tells, a story that's uniquely you. And now you get to start a new one! I can't wait to hear about the songs that fill its pages :)

Great job, Megan! Have to admit that Peter Pan is over my head but I never was very good at analyzing writing!
Keep the book and all those memories in a safe place!