At about 5 pm today, exactly one week before Christmas, I thought that I should go buy some Christmas cards to send out to my friends and family. But.... I mean...it's one week before Christmas. I am traveling for work the next two days. So by the time I would actually sit down and write the cards, it would be the 21st or 22nd. My cards, if I got them done, likely wouldn't get to people on time.

If you take away the world tragedies that occurred in 2016 (more on that in a minute), I had a pretty great year. I started it off by chopping 8 inches off my hair and slapping braces on my teeth....because why not change things up? The first few months of the year were focused on the planning of my best friend Sam's wedding, which was on April 2nd. We threw her two showers and a bachelorette party between January and February. It kept me busy, but boy did we have a lot of fun along the way. I loved every minute of it, even the stressful times. It was an honor and a privilege to play such a big part in her big day, and to be able to grow closer to some of my other friends through that. For as long as I have known Sam I've known that she is a romantic, a dreamer, a lover, and someone who likes to have a good time. Her wedding was all of those things and more. I couldn't be happier for her and Eric as they  approach their one year anniversary.

When spring rolled around, Tom and I found a great place to live together, starting the next chapter of our story. I switched gyms, I got back into yoga, I was working crazy hours as we were in our busy Relay for Life season. I grew closer with my coworkers, particularly Jenn, who quickly became one of my very best friends.

Summer meant spending time by the pool, going to concerts, going for a run every Sunday morning, having my annual "Girl's Weekend" with some of my dearest friends, and welcoming my baby niece Cara into the world, just two days before my 29th birthday.

Oh, and I also got engaged. Two days after Cara was born (so... my birthday, if you're playing along), I was sitting at home, waiting for it to be time to go to the 98 Degrees (yes, I'm serious) concert, when Tom walked in from work, took off his boots, and asked me to marry him. I knew the big question was coming soon. We had open conversations about it. So I wasn't that surprised, but somehow, the tears still came. I was completely overjoyed. I've known for quite a while that Tom is the one I want to spend the rest of my life with. That night we celebrated with some close friends (and 98 Degrees), and the celebrations continued throughout the weekend. We felt so much love coming from so many people. We quickly went into wedding planning mode and got some of the biggest things checked off the list right away.

With fall comes another peak at work, and I once again found myself working plenty of late nights and weekends. I kept running every Sunday until it got too cold, I went on my annual retreat with Sisters and Associates of Mercy, and I tried to spend as much time with family and friends as I could.

Through all of this, I am very, very grateful to say that my dad, who has battled lung cancer with brain metastasis since 2013, has remained relatively healthy.  We had a few scares along the way, but the doctors have always found a way to make his disease stable again. I can't say it's been any easier, or that I haven't had my moments of break downs over his stupid cancer, but I also know that we have been very lucky. He continues to fight and we continue to stand by him and carry him through this.

So while overall it's been a great year for me personally, I will admit that I have had my personal struggles. There are times I am way too hard on myself, or I get incredibly anxious and feel my heart nearly coming out of my chest, or there are times when I feel an overwhelming sadness and fog. I know I am not alone in this, and although it can be hard to talk about, I am not ashamed, either. It's part of who I am. I have found ways to work through these, and I know that it will be a lifelong thing. I am grateful for Tom, family and friends who helped me through my toughest moments.

So now that you learned a little bit more about my year... let's talk about 2016 in general.

It was rough, right? I think that all of us, no matter what side we are on politically, have felt the divide. There was the deadly shooting in Orlando, the instances of police brutality, the instances of police being killed, human trafficking on the rise, the Flint water crisis, and the election. It seemed like nothing but negativity was being put out into the world for a while. I remember one particular week where I just didn't want to get out of bed. I couldn't believe the world we were living in was so violent and scary, and that there was so much hate. There were many days when I felt helpless, hopeless, and just plain frustrated. I could go on, but I think we all get it, and we've all heard it. 2016 wore us out.

Many of us are now asking the question "where do we go from here?" and "what do we do now?". I spent a lot of time thinking about this, too. I wrote about it on this blog a few times, so forgive me for being repetitive. But when it comes to 2017, here is my hope for all of us:

As you are planning for the new year and choosing resolutions and your focus, think about where you may be able to do the most good. If you've been neglecting self care, this is the year you change that. Take care of yourself. You are worth it. If you can do just a little bit more to make the world a better place, find ways to do that.

Personally, I always find the idea of a new year a little bit scary, but that's coming from someone who doesn't like change. I'm terrified of what's to come, I'll be honest. But instead of spending every minute of every day in fear, I let myself have my moments where I can break down or be scared or just lay in bed for a few hours, and then I get back to work. Because there is always work to be done. Whether it's actual work for my job, or taking care of myself or my family or spending time with friends or volunteering, those are all things that I have to do to keep going. And I must keep going.

I hope you keep going, too, even when it feels impossible.

We'll do this, together. 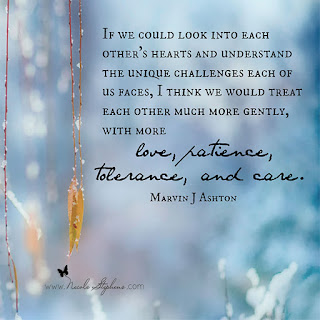