You know how in the movie Now and Then, there's a group of four girls that are completely different from one another but somehow remain inseparable? I can relate. Jamie, Lindsay, and Sarah were my three best friends for most of my teen years. I met Jamie and Lindsay in a tree house eating turkey sandwiches, and we became fast friends. I met Sarah a few months later, through Jamie and Lindsay. Sarah and I had an instant, undeniable bond.

Every year for about six or seven years, I took a trip Up North with these three girls. We went to Jamie and Lindsay's dad's cottage in Gaylord, Michigan.  there were a few summers we also went to their mom's cottage in Grayling, or there was the time we went to Traverse City. Once in a while we also made a trek out to Macinack Island. It didn't really matter where we were in the Great Lakes State, we always had fun.

I couldn't wait for Up North weekend to roll around each year. It was always around my birthday weekend, which made it that much more exciting. I was literally growing up with these girls. When we were younger, we'd agree on a CD to pop in the minivan CD player and play it for the whole trip, making up dances in the car and singing at the top of our lungs. It's funny how quickly our music tastes changed. One summer we were all about 98 Degrees and Aaron Cater, the next we matured to John Mayer. Gravity, baby.

When we arrived at the cottage we'd plop our stuff down in our rooms and make our beds. It didn't take us long to get outside. We'd sit at the picnic table looking over Heart Lake or hop in the paddle boat.

Most of our days Up North were spent playing Ponce. Ponce is kind of like solitaire, except you play in a group. It's addicting and intense. We were always laughing hysterically while we played and yelling at each other. We kept score and celebrated when we won. We'd all look at each other after we finished a game, and one of us would ask "again?". Duh.

While we played Ponce we sipped on Orange Pop, ate snacks and watched Nick Gas. That's a station that played old school Nickelodeon shows, including our favorite, Guts. We loved watching all those shows again and holding onto a piece of our childhood.

When it got to be close to dinner time, we'd all take turns in the shower and getting ready for dinner. We had several favorite restaurants up there. One of our favorite places to go was Big Buck, simply because of the cream soda drinks. Or Gobblers, famous for their turkey dishes. We'd all go to dinner, once in a while catch a movie, maybe visit the Elk Farm.  And, of course, we'd go putt putt golfing at least once a trip. Plus, when we arrived back at the cottage for the night we had a bonfire, cuddled up in our hoodies and making s'mores.

I have countless hilarious memories of our trips Up North. Like the time we jumped on someone else's trampoline for just a second before scurrying back into our paddle boat. Or the time our paddle boat broke down and got stuck in the lake, forcing us to swim and push it all the way back. Or when we decided to have a talent show. The events of the weekend shifted a bit as we got older. We started keeping our eyes open for boys, we could drive ourselves around, we wanted to go out on the town.

One of the last times I can remember being Up North is being at Jamie and Lindsay's moms place. At that point, Sarah and I were 20, Lindsay 19 and Jamie 21. We were all in college now, and our lives we clearly starting to take different paths. On one of those nights, Jamie and I went for a drive. She shared things with me she had never said before, about her past and some of her fears. I will never forget that drive, and feeling so silly for never knowing these things about her. How had I just let it slip by me? We ended up at an A&W, and ordered root beer floats, continuing our conversation from the car.

That trip was, honestly, one of the last times I've seen Jamie, Lindsay, and Sarah. Sure we've seen each other over the years here and there, but nothing like what we had before as kids/teenagers. We always say we will, and try to make plans...and it's not that I don't want to see them, it's just we all have totally different lives. I blame myself, I know I can and should have tried harder to keep in touch with them.

I watched Now and Then this past weekend, though. Twice. And the entire time, I was thinking of my friend. Because we were Roberta, Sam, Teeny, and Chrissy, with our own adventures and special summer memories. So girls, if you're reading this, let's create some new ones. I mean it this time. 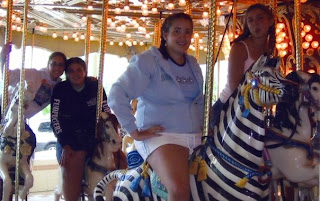 Wow! You sure had a good time and lovely memories with your friends Up North! May you all friends get together again and create some more memories! Cheers :)

I too have the same realization about old friends, about blaming myself about losing touch with them. Here's what I said about it in an old blog:

It saddens me to realize that some friends whom I used to share my life with everyday no longer talk to me except to post one-liner birthday greetings on my Facebook wall once a year. Was it my fault? Did I not try hard enough to keep them in my life? But then again there is a saying that goes: "As you grow older, you do not lose friends. You just realize who your real ones are."

Aaron Carter, now there's a blast from the past!

I know what you mean about losing touch with friends. My university housemates live all over the country and it's difficult to find times when we're all available to meet up. It's bloody marvellous when we succeed though :)

What lovely memories you have. Hopefully you all can get together again and create some new memories up north!

Makes me want to go back in time and take a trip Up North! Sounds like so much fun. :)

Awww, this is fabulous :) I've stayed close with my college roommates. Long-lasting friendships are wha tmake life worth it :)

Sarah Allen
(From Sarah, With Joy)

This just made me so happy! Some to add...I think the Aaron Carter CD was stuck in the car! We had no song choice that summer, but it was perfect! The goblAAA, I split upon myself, killing the spider in the carpet, the clown, the cute boy at the gobbler ice cream shop, Lindsay about to spew, the beer sampler at big buck, the crock of French onion, running down to the lake with burning sticks to see how loudly we could make them sizzle, the reappearing tampon (I'll let your other readers use their imaginations there!!!), hanging by a moment here with jack, the color song, styx in the car, your birthday on the golf course, and SOOOO many more. I don't think there is a time we have been together since that the paddle boat incident isn't brought up! I really love you all and miss you like crazy! We HAVE to get together ASAP. I will remain the ponce champion though. Yes, that is a challenge :-)

My friends were Jamie and Jenny. We grew up together, pretty much from pre-school and on. Unfortunately, once 11th grade hit, we all went our own ways. I still am sad about that and have no idea why it happened in the first place. Phooey.

I love the solitaire game, although, if it Pounce is the game I'm thinking of, I call in Nertz. Love love love it. :)

How wonderful to have such wonderful BFF's. Really, don't let another day go by without trying to reconnect!

Great post! It brings back memories for me, because our family used to go Up North every summer. We normally went to Roger's City which is not all that for from Gaylord. I love northern Michigan :)

I love you for sharing this on your blog. Looking back on that last time we were up north, I was really in a messy place in my life. I didn't really come out of that until just recently and I'm slowly reprioritizing and picking up the important pieces where I left off. So much of my time and energy was spent just trying to keep myself afloat, clinging to people that were wrong for me, and I too blame myself for letting our wonderful friendships get away from us. I think it was also a case where we were at that level of trust where we could let time spent together slide and always count on one another to be there and pick up right where we left off as though nothing had changed. Not many people have friends they could say that about, but I know I could call up any one of you after years of not seeing each other and you'd still be there. That's not an excuse for the distance between us, just something I value and feel incredibly lucky to have, and because I value it I'm so ready to dive right back in, catch up, and move forward together. Can't wait to get our plans in order for this summer. Love you Megaroo.