My sister Maureen is five years older than me. By the time I was old enough to really "play", she was hanging out with her friends, playing sports, and doing homework. Not that we didn't spend time together, because we did, but we didn't spend every waking moment together either.

Mostly, my sister was there for me as a teacher and a role model. I followed her lead. She liked to read, so I started reading at a young age. Maureen played sports, so I played sports. I wanted to be like her.

I remember mostly how many friends Maureen had. She was friends with everyone, and it seemed that she was the person they all went to when they had problems. I remember her being on the phone a lot, but not to gossip or cause trouble, to listen to her friends and dish out advice. And she had friends over often or was out with them. She took her commitments seriously, especially to her sports teams and her schoolwork.

One time, Maureen and her friends came home from a night out. They were in high school and I was in middle school. We thought it'd be hilarious to scare them, so we hid under the table in the dining room while they were putting together a midnight snack. We popped and then laughed hysterically as Maureen and her two friends screeched and jumped.

My sister went off to college to Indiana University when I was going into 8th grade. During our winter break, we went to visit her. My parents, Jonathon and I stayed in a hotel but Jonathon and I each got a night where we got to spend the night at my sisters dorm. We thought that was the coolest thing ever. I had so much fun with my sister and her roommate Meghan. I loved being on a college campus and seeing how happy Maureen was at Indiana.

My most recent favorite memory of Maureen has got to be when she became a mother. I will never ,ever forget the way she announced it. We took a siblings trip to Florida. I drove down with Maureen and her husband Dave. We met up with Jonathon and Sara at one of our favorite restaurants down there. My brother was gung ho on ordering raw oysters. Finally, my sister sweetly says "I can't have any, because it's not good for the baby". We all jumped out of our chairs, screaming. I think I shed a tear. The rest of the trip we talked a lot about the baby and our excitement for the little booger. Once when we were in the ocean, the waves were getting high and Mo wrapped her arms around her tummy and yelled out "MY BABY!", not wanting to hurt the little dude. She gave birth to Ryan Michael on October 30th, 2012, and I tell ya I have never seen her this happy. It's a beautiful thing to watch.

And then there's Dave. Dave and my sister met when they were seniors in high school. They started dating, and continued dating for several years. Sure they broke up a few times, but only for short periods and we all knew that they'd end up together. I've known Dave since I was 13 years old- 1/2 of my life. He's a big part of my life and perfect for Maureen. He makes me laugh and he's a great teacher, too. He loves being around people and can talk to anyone. I have many memories of him since I practically grew up knowing him. I remember once I was begging my parents to give me a ride to a friends party. They couldn't because they were jetting off to Indiana, and my sister had other plans. So Dave drove me and picked me up. Or one time I was about to start softball season and realized my cleats were too small. So it was Dave who drove me to the Sporting Goods store one evening to get a new pair. Dave has protected me through the years- kind of taking on the "brother" role since my brother has been in Indiana. And I couldn't ask for anyone better to step in. People gravitate towards Dave because of his warm personality, and I also find myself spotting for him at family functions because I know he'll ease any anxieties I have.

Maureen and Dave are just two of those really cool people, you know? Everyone loves them. They work hard and love life. They stand up for what they believe in and they try to live life simply. I adore both of them. 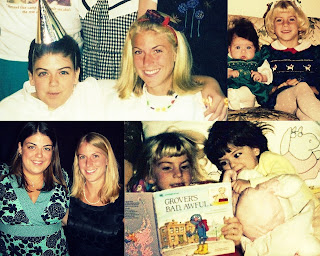 Maureen sounds like such a wonderful person, and Dave too. You seem very close to your siblings and their significant others! Jealous. Haha.

Maureen sounds like the perfect big sister. The pictures are priceless. I especially like the one where Maureen is reading to you.

Your sister sounds absolutely lovely! Really nice post! And Dave sounds like a great guy, my sisters husband also has that big brother role going too! This post reminds me of my sister a lot (:

What a cool family! Can feel the love and warmth you all share! Touchwood :)

Your sister Maureen sounds amazing. To have a such a beautiful relationship even with the years of difference you are blessed. I love how she announced she was having a baby to you all. You are truly blessed with an amazingly beautiful loving family. Thank youf or sharing them with us here on your blog!
Blessings

I am loving reading your posts! Your family sounds really great. Thank you for sharing your memories with us.

More good memories. It's great you have good memories of your sister like that. I was the older sister and not sure how my sister looked at me. I know for a little while she thought I got more attention then her. Then she got some of it and realized how much pressure that brought with it and changed her mind. That's about all I remember.

I was bff's with my brother growing up because we were closer in age. Like you my sister was years older than me. She spent time with friends and was extremely studious. I didn't spend much time with her growing up. Now, though, we talk a lot and do stuff too. Interesting how times change.