I wanted to sneak stories of my siblings within my memories, but then I figured...hey, why not just dedicate an entire post to them? So J is for my brother, Jonathon. Watch in a few days for M, for my sister Maureen. And I'll sneak in some little tidbits about my sister in law Sara and brother in law Dave.

Jonathon is two years older than me. As kids, we were inseparable  He was my best friend. We came as a pair. when I was really little, I couldn't quite pronounce his name, so I called him "Jonshin". Now, he's decided to go by Jon, but I still call him by his full name, Jonathon. Thinking about childhood, Jonathon is the first person I think of. He was, after all, by my side through most of it.

He's lucky I wasn't a total girly girl. Sure I liked dolls and Barbies but I was also into Ghostbusters, X-Men, Power Rangers, and Ninja Turtles. He taught me about all of them and we played with his action figures for hours. We'd also pretend to be them in our backyard. Our backyard was our stage. We could be whoever we wanted to be.

My brother could, and still can, make me laugh harder than anyone I have ever known.  We always went out to breakfast after church-a little family traidtion. One time, I was eating jello, and he said something ridiculous. I spit out the jello and it went flying across the room and landed at another table. I was so embarrassed, but he could not stop laughing. To this day, he finds it hilarious to try to make me laugh while I'm eating or drinking to see if I'll spit it out. Just last April, when we took a sibling trip to Florida, he made me choke on Orange Crush, and he thought it was the funniest thing of the trip.

He is also the mater of impressions  He'd have us all keeled over at the dinner table doing an impression of my  Grandpa or one of our teachers. He loved to make us laugh- you could just see how much joy it brought him. It still does. He will still call me and do impressions or send me a text message of a clown picture because he knows how much I hate them- but he also knows it will make me laugh.

Jonathon also used to love Pro Wrestling, and I'd watch it with him. Soon I was hooked, too, and we closely followed the story lines of characters like The Rock and Kane. It was something we talked about together and enjoyed watching. Eventually we grew out of that little phase.

My brother has an obsession with Notre Dame football and Detroit sports. He was a Red Wings nut- still is, but even more so as kids. He and his friends would have a Stanley Cup game of street hockey- they even constructed their own Stanley Cup Trophy out of tinfoil and water bottles. Now, at his home, he has an entire "man cave" dedicated to his loves of Notre Dame, Detroit Sports...and I won't lie, you'll find some X Men and Ninja Turtle things in there, too.

We were not super close in high school.....we each did our own thing and we probably fought more than we got along. But, when he moved away to college, I was very sad. Jonathon went away to University of Indianapolis and has lived there ever since. He came home for a summer or two, and always came home for the holiday's, but now he is married to a wonderful gal named Sara, and his life is in Indiana. I miss him terribly, but I am so incredibly proud of him. He has a real heart for other people, and still gets great joy out of making people laugh.

Recently, my favorite memory of Jonathon is watching him at his wedding. It was the happiest day of his life and anyone would be able to see that by the look on his face. He was surrounded by people he loved, and people he cared about. Plus he was marrying the girl of his dreams. It was the perfect night.

Sara is one of those people who just gets me. I can give her a simple glance across the room and she will know precisley what I am feeling. She loves crafts, thrift shops and owls. She finds humor in every situation, just like Jonathon does. She likes to listen to people and hear their story. I have loved getting to know her as my sister in law and can truly call her my friend, and one of my best friends. Sara and I had an absolute blast in Florida last year. At one point we went on a walk to collect shells, end wond up running around the sand dunes acting like we were in the Hunger Games. We were laughing and screeching like little kids- so carefree and letting go of all our worries. It was a blast. Sara is fabulous- and one of the first people I go to in a crisis. I trust her to take care of that big brother of mine.

So, Jonathon, thanks for all those memories of childhood and for making me laugh. 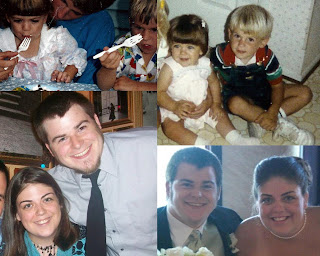 I was BFF's with my bro growing up. We would do everything together. He's a champ, still is.

I love hearing about peoples' relationships with their siblings. I've always wished I was closer to mine, but we're just too different to get along.

Jonathan sounds like a pretty cool brother, lucky to have found Sara. What a win, win for you. What wonderful memories.

Jonathan sounds like a great big brother! My younger sister makes me laugh pretty much daily. I love the bond we have, and I love reading about yours with Jonathan :)

What sweet memories. My brother was 15 years older than me so he was out of the house before I was old enough to remember him. We never lived close to each other or saw each other often. I think we both missed out.

I'm glad I found you through A to Z challenge. Have a nice day

Sounds like you and your siblings have a fun and close relationship. Happy for you!

Ah siblings. They really are awesome, aren't they? I'm the youngest of 8 so I know how that goes.

They are some of the most frustrating people in the world sometimes, but I could not imagine my life without them!

Wow, what a lovely post and it is so great you get along so wonderfully with his wife.
Lucy from Lucy's Reality

Lovely post and every word showed how much your brother means to you. Just awesome.

What a delightful post about your brother and sister-in-law — two people whom you obviously love.

Aww Megan your brother sounds like a lot of fun. So glad that you have such a good relationship and wonderful memories. I am enjoying your stories so much.

how lovely and those pics are fab.
They look so happy :)

Those photos are lovely :) So nice to be that close. I am with my sister but my brother is a very no go kinda guy! He's a great person but not one for hugs or deep talk! x

Ah, fun times. I used to play power rangers as a kid with friends, and put up with barbies with my sister cause she liked them. It's nice to think back on the past sometimes with siblings, whether they were annoying or not throughout the years.