At Mercy, there is an option of participating in Habitat for Humanity over Spring Break during your senior year. I pretty much knew that I wanted to do that early on as a student at Mercy, and once I became more involved in Campus Ministry, I was definatley in.

Most girls were going on crazy spring break trips to Cancun or Florida. A group of us were headed to Beattyville, Kentucky to help out. Luckily for me, the group largely consisted of my best friends. We had a large group of friends. Half of us were doing Habitat together, the other half were going to Disney World.

Participating in Habitat for Humanity was one of the coolest things I've done. On Easter morning in 2005, we hopped into two vans and drove down to Kentucky. The ride down was hilarious. Our friend Sarah read aloud passages from a cheesy romance novel, and we shared stories of boys and adventures we had been on. I remember my friend Liz downing Diet Coke like it was her job, which resulted in us having to practically carry her to the bathroom at the next rest stop because her bladder was so full she couldn't walk straight.

Soon we arrived at our location. Beattyville was small. The "downtown" was literally one intersection  I still remember us trying to find food in that town the first night, but since it was Easter, everything was closed. The only open store was a gas station, so we filled our bellies with macaroni and cheese and pizza rolls. Our shelter for the week was this tiny little home lovingly nicknamed "habitat house".  It had a living room, a kitchen, and a few bedrooms. Us girls were all in one room with bunk beds. Yep. That means there were 9 teenage girls in one room. There was a youth group sharing the Habitat House with us, and only one working toilet and shower. Space was tight. .

During the week, we worked on many different building projects. We helped to start the foundation of a new church being built, we painted an elderly woman's home, fixed up another home by replacing doors and helping rebuild the roof, cleaned and painted a trailer for a really sweet couple. We had so much fun building and painting  We had warm weather and we surprised ourselves, I think, with how hard we could work. And I know we were all sore, but we also felt good being able to give back to these people.

I don't think I'll ever forget that trip or the people of Beattyville. One night the church hosted a dinner for us and we got to mingle with people. Everyone was so nice, life was simpler than it was in Detroit. On one of our days, Pastor Herman, who led our group throughout the week, took us to the Beattyville Museum and on a gorgeous hike to Natural Bridge. Pastor Herman was a sweet, sweet man and he really wanted us to get a lot out of the experience. He joked around with us and thanked us often for what we were doing.

More than anything, though, I remember how hard we laughed through the week. We created some really great memories and bonded even more as friends. There was one night in particular I remember. We went "cruisin" just like the locals do and hit up the Dairy Queen, one of the only hang outs in town. We then drove to a place known as Happy Top, and as Pastor Herman told us, it was where "the lovers went". We laid there, as a group of friends, staring up at the stars and sharing our fears about college and leaving high school.

On the last night, we packed up our things and signed the wall-it's kind of a habitat tradition. Every group picks a spot on the wall and draws or writes something unique to their experience, and then everyone signs around it. I don't remember off the top of my head what we wrote, but I know I have a picture of it somewhere. The next morning we drove back to Michigan, after saying goodbye to Pastor Herman and to Beattyville.

When we returned, one of our chaperones for the trip sent us all cards in the mail thanking us for our service. On the card she wrote "never forget the people of Beattyville. Simple life, simple living. Happy life". I have carried that phrase with me, and when I get frustrated because my internet won't work or because my paycheck is lower than I'd like, I do remember the people of Beattyville, and how happy they were just to have running water.

I am so glad I decided to do Habitat. Its' something I am very proud of and a memory dear to my heart.

Here is a picture of the "Habitat Girls" at our Prom. 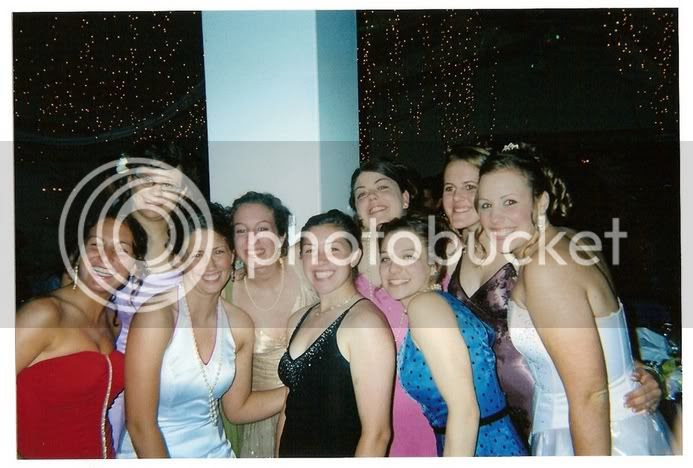 Such a great experience! When we lived in Maryland our church youth group did a habitat trip every summer and my oldest daughter got to particpate.

Thanks for visiting my blog today via the challenge. Good luck with the rest of the alphabet : ) My daughter is also a blogger...I'll send her here to read your post as I know its something dear to her heart.

I remember when you chose to so this instead of bringing a few friends to Florida for your senior trip. So proud of you.

Sarah Allen
(From Sarah With Joy)

I liked reading this! It warmed the cockles of my heart. It seems like you genuinely had fun.

I also volunteered for Habitat for Humanity once, in the Philippines. We helped build a house for a family who needed it. I really had fun too. I've been wanting to get back to doing charity work for some time now. Thanks for reminding me of Habitat. Maybe I'll find the Singapore branch.

From the A-Z neighborhood,
Dee is for Deecoded

I have ALWAYS wanted to get involved with Habitat for Humanity. It is such a worthy cause. Good for you!

Megan, this sounds like a great experience, very inspiring. Blessings for the rest of the week.

Thanks for the inspiration! What a great experience! Habitat is a great charity!

Hi there! My mom directed me to your blog. I loved the Habitat trip I got to be a part of. These are such special memories you've shared. You'll never regret giving up a "fun" spring break to help others. Really beautiful post!

What a great thing you did! I always wanted to look into it. Very nice!

What a great story and experience. Thank you for sharing this with all of us. :)

What a wonderful post! it sounds like you had a great experience and enjoyed sharing it with a group of wonderful people.

Wandered over thanks to the Challenge! Enjoy the rest of the alphabet.

That`s so neat! I wish to do something like this when I get the chance. :)

Wonderful story of a creative adventure.

What an awesome post. I'd have chosen Habitat for Humanity too, but then I never was much of a party girl.

The church I attended as a teenager was sending some of our youth group to help out an Indian reservation in the same way. I really wanted to go but grew up pretty poor. My family couldn't afford to send me :(

So, I'll just live vicariously through your memories here, I suppose. Still only working class, but some day I'm gonna do something like this (not that I hold off all charity).

What a wonderful way to spend your spring break and what wonderful memories you'll always have.
Times helping others are always the happiest times.