Once again, the idea of "fat shaming" has made the news. What happened this time?

New York Magazine published a "behind the scenes photo tour" of Lilly Pultizer's headquarters. For those who don't know, Lilly Pullitzer is a pretty famous clothing brand known for it's bright colors.Their stuff is cute, and recently became available at Target.  Anyways, this photo was part of the "photo tour" 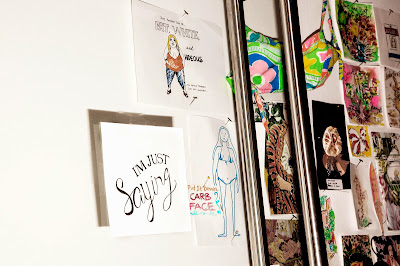 If you can't read the text of the pictures, they read " The captions read, "Just another day of fat, white and hideous... You should probably just kill yourself," and "Put it down, carb face."

At first, this seems really bad for Lilly Pultizer as a brand. Like, really bad. A women's clothing company terrorizing larger women? Not cool, not cool at all.

But upon further investigation, apparently these pictures are posted in an employee's cubicle. Her personal space.

Meaning- these pictures must serve as some sort of motivation for her or something- she's clearly pretty terrified to gain weight and seems to think that being fat is worthy of killing oneself. Which is a damn shame.

It's a shame because no one, no matter where you work or what kind of clothes you wear, should feel this way- yet, we all do it. Maybe not to this extent, but we do. We strive for these perfect bodies, and we're terrified of looking "fat". But the even more complex part of that is that we all have different ideas of what "fat" is. So we beat ourselves up over every little pound that we gain, or every stretch mark on our body, because we align those things with failure.

It's not just this employee that does this and while it's a bit confusing to me that she would have this up in her workplace, I can't call her a horrible person or pint a finger at her. Because as much as I preach body positivity, I too, get down on myself.  I have also used looks as motivation. I don't like that I do, but I'm human.

So maybe instead of attacking this employee, we need to have deeper conversations about the root of this issue as a whole. WHY IS BEING FAT THE WORST THING IN THE WORLD? Why? I would love to explore that question with the world. I want to know answers.

Some may answer "it's gross" and to that I again say- why? Who determines what's "gross" and what's beautiful? Is there some sort of regulation that tells us people over a certain weight or bmi are now considered gross? I don't think so. Other's may argue that it's unhealthy, which is just a cop out answer. Fat does not equal unhealthy. Skinny does not equal anorexia. We keep trying to put people in boxes and it just doesn't work that way. I don't know about you, but I rather like the fact that there are so many different kinds of people walking this earth. Comparing and contrasting needs to stop- appreciating each other for all that we are is where we need to head.

To the employee who posted these drawings and these words, I hope that after today you've had some deep reflection and that you learn to love yourself. Quit looking for perfection in your body type and just be happy with the way you are. Also, please know that as a former fat girl, being fat is really not that scary, nor is it the worst thing in the world to be.

To the rest of the world, let's stop shaming OURSELVES or others as motivation. You want some inspiring words or pictures to hang in your cubicle? There's this thing called the internet. You can google "motivational quotes" all day long. If that doesn't do it for you, post a picture of something you've always wanted to do or that you will do when you lose the weight. If it's motivation to not gain weight, post a picture of yourself looking fabulous in the size you are now. That way, when you can look at it, your thoughts will be "Damn, I look good".  Because you do.

LOVE this!! Thank you for sharing! :)