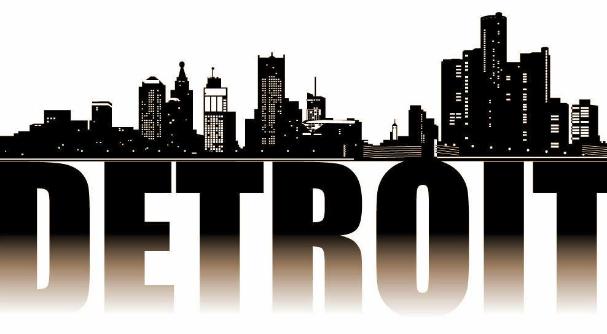 I love this city. When I was in high school, a group of my friends and I did Habitat for Humanity during our Spring Break. We traveled to Beattyville, KY to help build houses and a church for the community. I remember that trip very clearly- not only for our service but for the laughs we shared together. Everyone down their asked us where we were from, it was pretty obvious we did not fit in. We quickly responded "Detroit". One of my friends, Mary, rolled her eyes. "THEY are not all from Detroit. I am". She was mad we didn't say we were from the suburbs. I never quite understood that. IS someone from Beattyville, KY going to know where Bloomfield Hills is located? Not likely. Detroit? Likely. I didn't understand why it mattered. Sure I didn't live in the city...but I had been there...for like...concerts and stuff. Plus I had friends that lived there. That counted, right? Wrong.

I would never fully understand what it meant to be a Detroit resident until I lived there for myself. For one year, I lived in Detroit (Trumbull and Michigan Ave) with three other roommates. We were doing a year of service through the Mercy Volunteer Corps and placed at different organizations around the city. I soon learned Detroit was about more than concert and sporting event venues. It was a city full (well...not exactly full, but you get my point) of people from thousands of different backgrounds, beliefs, stories. People who hated the city and wanted to get out of there as quickly as possible, kids who were told they never would get out of there, and people despretly trying to make a difference. I saw working people, over-working people, homeless. I saw rich and very poor. I saw excited and I saw bitter. I saw victory and happiness and I saw defeat and heartbreak. But through all of that, I saw beauty. Yes, I think that Detroit is beautiful. Call me crazy, but until you see it for yourselves, until you truly live there and take in the experience of being a "detroiter", you have no idea what I mean.

Detroit is full of these little hidden treasures. Good Girls Go To Paris. Heidleburg Project. Campus Martius. Cafe Con Leche. The Burton. Little Bird. Amazing places, amazing people fronting these businesses, trying to breathe life back into a city that has suffered more than anyone could ever imagine. I have zillion "favorite places" in Detroit. I've met beautiful, anxious, inspring people working insanley hard every single day to deliver to the people. That's what makes Detroit beautiful...the hidden treasures. It's not hard to find something you like in Detroit.

I have been lucky enough to work with a large number of teens in Detroit. One thing they all have in common? They've been told they won't make it. Imagine that. Imagine your whole life hearing from a parent, or a different family member, a family friend, the news, a teacher, someone on the street..saying "hey. kid. you won't make it.". The cycle that turns into is a dangerous one, and we are seeing it now more than ever. But I've seen kids who have turned around and said "screw you. I will make it, and this is how." I have more belief in those kids than anything else. You can tell me I'm naive, but I tell you to go visit Cristo Rey High School, have a conversation with those kids, and PLEASE tell me that they won't make it in life. I dare you. Every single one of them has the potential. We have to work a little harder to make some of them realize it, but they will. They will get there, and they will play a huge role in turning this city around. I promise.

I cringe when I hear bad things about Detroit. I worry watching the news, fearing one of my kids has been hurt in a hideous crime. It's not a bad city. We've had horrible things happen, there are people who are so far past the point of desperation they are willing to go to any lengths to escape reality. Detroit will rise. We will make it.

Also, now that I am back living in the surrbs (I'm not a traitor. After a year of volunteering, I need to live with good ol mom and dad for a while), I do miss that city. I'd love to go back. But when I do, I want to bring people from these parts with me. I want them to see it for themselves, without going to a concert or a play or a Red Wings game. I want them to meet some of the people I did. Vist the museums, go to the grocery store and talk to the cashiers. LIVE IT. That is what it is going to take to bring this city back.

I love you, Detroit. Thank you for being so good to me. Take care of yourselves.
Posted by Megan at 5:05 PM