In Sickness And In Health

I'm going to take a wild guess that you've heard this at least once in your lifetime. I'm sure we've all been to at least one wedding, right? Or at least seen one played out in a movie, or read about it in a book. I know I've heard these vows exchanged.

I've always loved this part of a wedding ceremony. The promise to be there for the one you love, for the rest of your life, no matter what comes your way. These words, these vows, are what has made me the kind of person who really, truly believes in the Holy Sacrament of Marriage, not just the ceremony itself.

And over the past year and 9 months, I have seen these words come to life through the words and actions of my parents.

My dad was diagnosed with Stage 4 Lung Cancer on September 22nd, 2013. It shook our world up- within days, everything we knew changed. It meant my mom was now considered a caregiver. It meant doctor appointments and medications. It meant side effects and stress. It meant fear. Late last summer, we hit a pretty big bump in the road when my dad went through a month of steroid psychosis. Most of you know the story, but basically, it was Hell. It was the most difficult, fearful time of our lives. But my mom was there with him, every single day, holding his hand, asking the difficult questions. Sure, she broke down. How could she not? But she did not give up on him. And my dad, who was barely recognizable, would show signs of his love for her. One night, when he couldn't speak, he simply kissed her on the head, again and again. Another time, when I played their wedding song for him, he weeped. And, another time, when he snapped out of the state for just a few moments, he held her tight and apologized over and over. He knew the pain that she was feeling, even if he couldn't speak of it.

My dad has, thankfully, recovered from that psychosis. But things have never been the same. He had to retire early, he could not drive for several months, and he is on several different medications. My mom holds it together for both of them. She has his pills perfectly organized, she knows the name of every doctor he meets with, she sits with him at his appointments.

But perhaps most importantly, they are there for each other. Neither one may ever fully understand what the other is feeling, but they listen to each other. They support each other. They ask questions and they do their best to help each other. They look at for one another and put each other's best interests forward. They are a team, navigating through these choppy waters.

Some may say "Any married couple would do this!"...but I am really not so sure. You hear so often of couples giving up when disaster strikes- but my parents have held on to each other, to faith, and to love.

I feel so lucky to have them as my parents. I did a project once in college that involved describing your family tree in relationships. Basically, the point of the project was that, most likely, if one is surrounded by strong, committed relationships that value honesty, respect, and compassion, that person will also form that type of relationship. If this is the case, I have nothing to worry about. My parents have lived out their vows from the moment they spoke them out loud. They've modeled those values into our lives, and they have shown us, through action, what it means to be someone's partner, for better or for worse...in sickness, and in health.

And so, on their 36th wedding anniversary. I want to congratulate my parents, and also to wish them many, many more years together. This love story is one that will be shared for years and years to come. 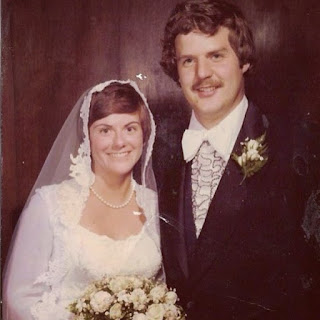 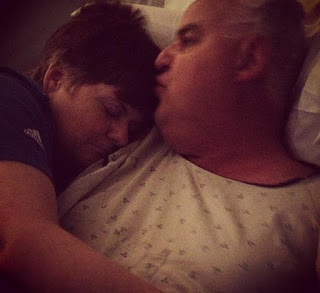 Happy Anniversary to them!! :)