I will not forget the first time I heard Adele. I was in college, partying with my roommates. Saturday Night Live was on in the background. My best friend Sam noticed Adele, the musical guest on SNL. Sam pointed at Adele and made a comment about how refreshing it was to have a bigger girl on TV, singing her heart out. Adele wasn't like the typical pop star.

I then remember seeing Adele's video for Chasing Pavements on MTV. I was mesmerized. Her voice was so soulful and rich. I remember jamming to her first album, 19. I remember how ecstatic I was when the hit single "Rolling In The Deep" was released. I remember shedding a tear the first time I heard "Someone Like You", but shedding even MORE tears when I heard "Don't You Remember", a track off of her incredible album 21.  I remember how anxious I was to get my hands on her third album, 25, and how happy I was to hear how she has grown as an artist and as a person.

My original impression of Adele remains true to this day: She is not the typical pop star. There really is no one like her right now. Aside from her outstanding vocals, emotional lyrics and soulful style, she's also (seemingly) down to earth, gracious, and hilarious. The real deal. Everything you could ask for in a singer, without any antics necessary.

I've never been able to see Adele live. She has sold out her shows every time she's rolled into town. And, as she gets more and more famous, it has become increasingly difficult to even try to get tickets. She's coming to Detroit for TWO nights, and both concerts sold out in a matter of about 5 minutes. I was "in line" on Ticketmaster just before they sold out. As the dates got closer, I was searching the Internet for tickets. I didn't want to pay a ridiculous amount, but I just couldn't imagine skipping out on this show. Of all of the artists I love, Adele is one I absolutely MUST see. I said so in 2011, and I say so now. 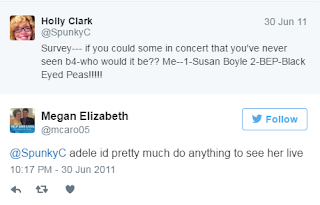 Well, luck came my way because my friend Kristen, who was one of the lucky ones who got tickets when they went on sale, decided to upgrade her seats and sold her original tickets to Sam and I. So now I am going to see Adele. I can barely even type that sentence out, it doesn't seem real. I know that may seem a bit dramatic...I just can't even believe it. Her music has gotten me through some of the toughest heartbreaks I've ever felt. I KNOW I'm not alone in that. That's what is so special about her music. So many of us feel something when we hear it. That's what makes Adele so special.

I mean...my feelings for Adele can be summed up in this tweet from 2015:

I wanted to share 10 Adele songs that you may not know if you don't own her albums. Make no mistake, her singles have been incredible. But I'm not going to include them here because my hope is to introduce you to a song you may have never heard before. So here are my 10 favorite Adele songs that were not radio singles.